Sustainable new jobs can more than replace lost coal jobs while preserving the environment in the coal regions of Bulgaria, Poland and Greece.

Jobs in coal are plummeting across Europe as countries shift to renewable energy sources – WWF is calling for EU countries to phase out their coal power by 2030 to fight the climate crisis and uphold the Paris Agreement. Phasing out fossil fuel-based electricity generation, especially coal, is a prerequisite for fulfilling the European Union’s commitment to the Paris Agreement and the leadership role the EU strives to have in global climate policy. Such a major change must be accompanied by a comprehensive Just Transition Strategy to minimise hardships for workers and their communities in the associated industries through active political and financial support, as well as shifting local economies towards sustainable economic activities. This is particularly significant for the coal producing Stara Zagora, Pernik and Bobov Dol regions of southwestern Bulgaria.

The European Commission has set up a €17.5 billion Just Transition Fund to help mediate the social impacts of the shift from coal in regions whose economies have been based on it. Communities can access the fund by drawing up plans which are submitted by their government to the European Commission. The Fund – and its sister schemes under the Just Transition Mechanism, in combination with the national and private funds, are a huge opportunity to shift to a durable, climate-neutral economy. The new WWF report, Europe’s Coal Regions: Boosting Employment, Environment and Economy through ‘Just Transition’  takes an in-depth look at the problems and opportunities in the Stara Zagora, Pernik and Bobov Dol regions of southwestern Bulgaria; Silesia and Eastern Wielkopolska in Poland; and Western Macedonia and Megalopolis in Greece.

The report finds that planning, local participation, transparency and a commitment to end fossil fuels are crucial aspects for all the regions which, alongside the financing, can turn coal communities into sustainably and economically thriving places to live.

“The analysis in Bulgaria shows that 15,600 direct coal sector employees will easily find jobs in existing economic sectors, but they will be lower paid. Only 2,850 jobs will be created based on innovations and new technologies generated by the Just Transition Fund that will pay higher than current levels. That is why it is crucial that the Fund’s resources are directed to sustainable and innovative economic activities which will allow a real Just Transition.” - Georgi Stefanov, Chief Climate and Energy Expert, WWF Bulgaria

Just Transition in Central and Eastern Europe (CEE) will contribute to achieving EU climate neutrality and the local development of target regions by having a positive impact in all the important aspects of the transition process – social, economic and environmental. For example, the total coal reserves in Southwest Bulgaria are estimated to be relatively small - less than 15% of the country’s overall reserves; 5% of which is extracted. The two operational thermal power plants (TPPs) in the region, TPP Bobov Dol (Bobov Dol municipality) and TPP Republika (Pernik municipality) burn about 2.5% of the coal, and generate approximately 5% of Bulgaria’s annual electricity production. Closing down these two coal-fired power plants will leave an annual 903,781 MWh energy gap that will need to be filled by alternative sustainable sources and energy saving measures.

For example, there are over 150 protected areas of all types in Southwest Bulgaria, including two of the country’s three national parks: Rila National Park (the largest in Bulgaria) and Pirin National Park (also a UNESCO World Heritage Site). These conditions favour economic alternatives such as the development of various forms of tourism, organic farming, organic stock-breeding, sustainable forestry and fishing. Moving in this direction would also comply with the desire that economic activities should be compatible with the conservation of valuable species, habitats and nature in general. This fact should be a prerequisite for a sustainable future and be considered when deciding on alternative, Just Transition Mechanism-funded economic investments in the region.

“The lessons for the EU are clear. We can get this right, but to do so, the EU Just Transition Mechanism must only be used in ways that support a transition to a net-zero carbon economy, like by investing in job-creating renewable energy or the circular economy – and not in anything that would undermine it or create stranded assets, like the false solution of fossil gas. What’s more, the EU Commission must check local level plans aim for zero fossil fuels and are drawn up in a participatory, transparent and fair way.” - Katie Treadwell, WWF European Policy Office

The report also finds that:

● Job numbers in mining are falling and many more are at risk. In Silesia, Poland, 15,000 to 18,000 workers in mining-related companies are at risk of losing their jobs by 2030[1]. 2,200 coal jobs in Greece are under imminent threat;
● The impacts go beyond employment numbers. Local communities in Western Macedonia, Greece, will suffer income losses of some €3.1 for every € 1 taken off lignite-fired activity;
● However  in many regions, sustainable jobs can more than replace those lost. Up to 22,000 jobs could be created in Poland’s Eastern Wielkopolska region alone, making up for the jobs lost in the coal lignite sector and related sectors; and
● To enable a successful Just Transition, the Just Transition Mechanism should prioritise investments linked to the net-zero carbon economy. This will help use the skills of former coal workers and take advantage of the growing demand for technologies and products in a low-carbon economy.

● The foreseen Action Plan on Social Economy and the implementation of the European Pillar of Social Rights should take particular account of the needs of regions in transition and particularly coal regions; and
● The Commission should ensure that the Territorial Just Transition Plans are consistent with other EU funds – including the main recovery fund, the “Recovery and Resilience Facility” (RRF) – and in line with the EU Sustainable Investment Taxonomy and the Do No Harm Principle.

Background
The goal of WWF’s Just Transition Project is to develop tailor-made transition strategies for economic transformation of specific regions in Bulgaria (Southwest Bulgaria), Greece (Western Macedonia), and Poland (Silesia), supported by best practice examples from Germany, away from coal and towards sustainable economic activities. A key message is to make the stakeholders from Bulgaria, Greece, Poland, as well as Germany and Brussels recognise “just transition” as a fully legitimate part of climate change policies.

The report was written and designed as part of WWF’s Regions Beyond Coal project, supported by the European Climate Initiative (EUKI). 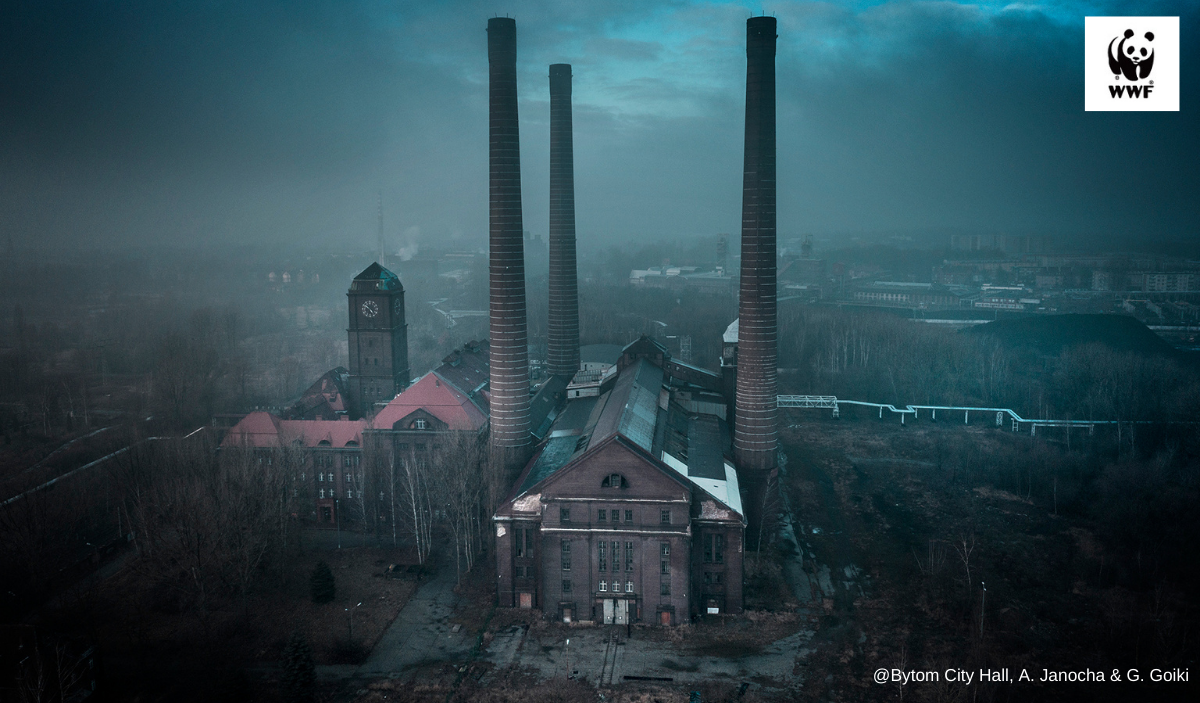 An in-depth look at the problems and opportunities in the Stara Zagora, Pernik and Bobov Dol regions of southwestern Bulgaria 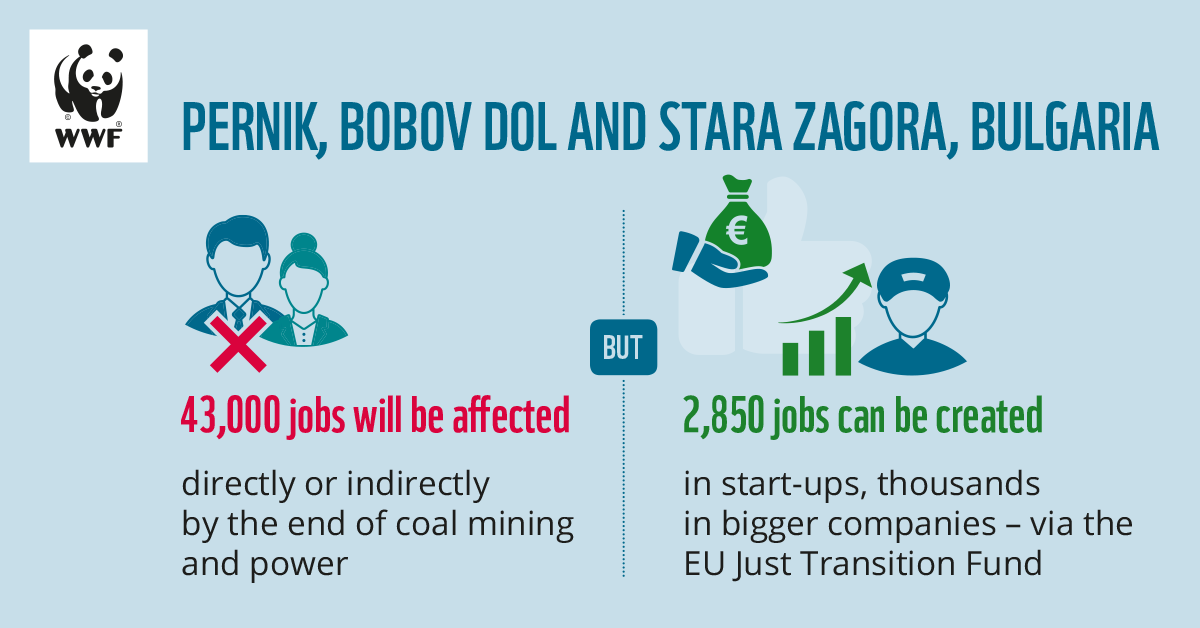 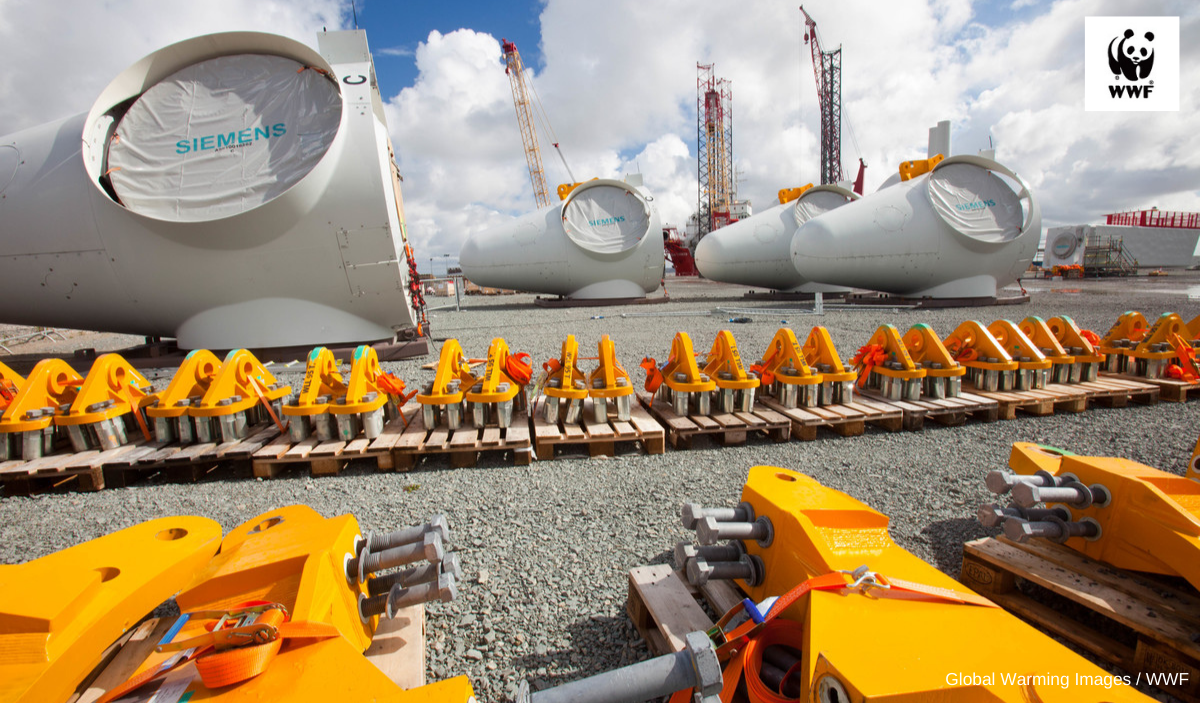 The lessons for the EU are clear. We can get this right, but to do so, the EU Just Transition Mechanism must only be used in ways that support a transition to a net-zero carbon economy. 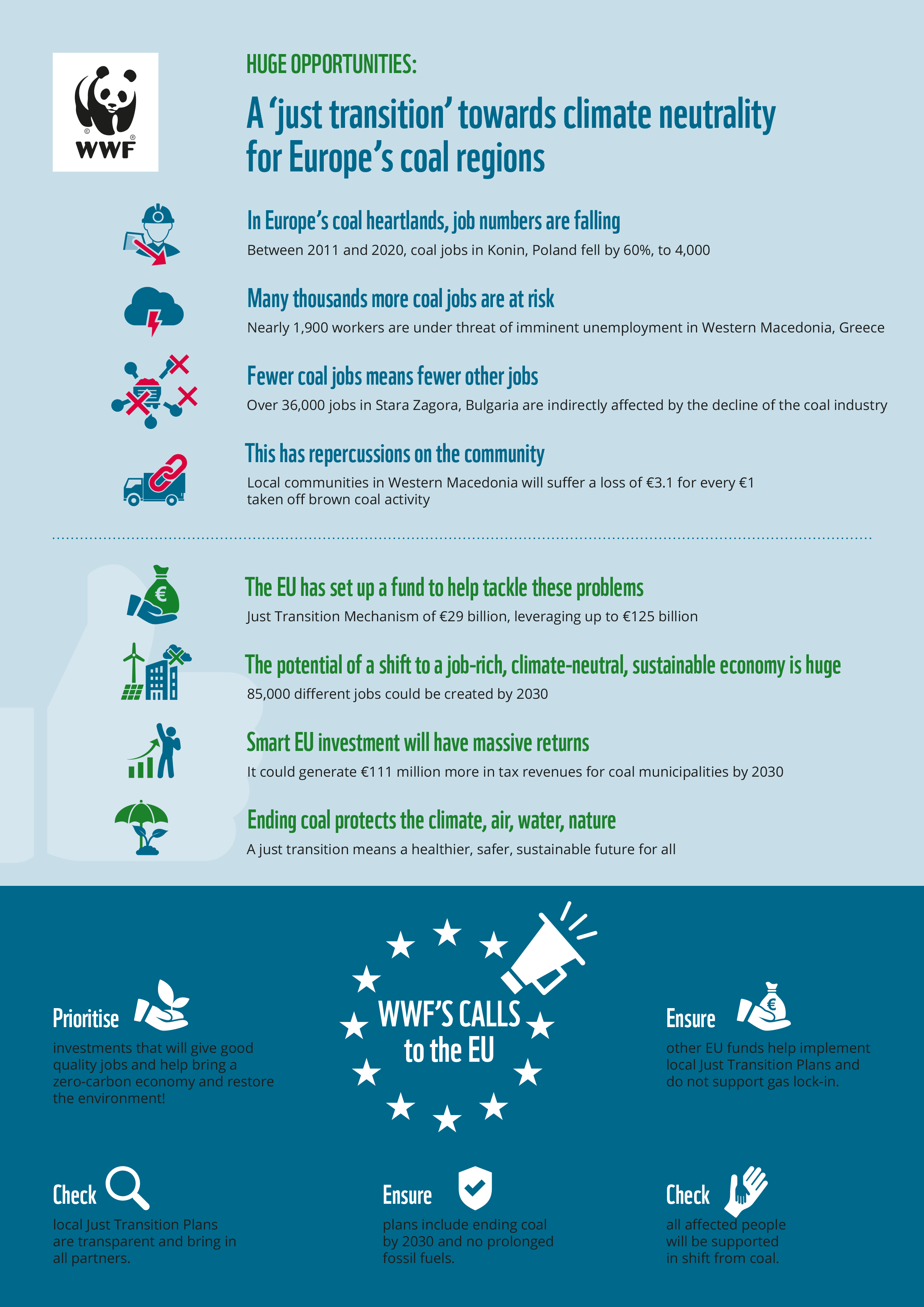