Dams are one of the main factors in the 76% collapse in freshwater migratory fish populations since 1970.

2020 August 3 - More than 500 dams are planned or under construction within protected areas, according to a new study published in Conservation Letters. These findings raise red flags as dams can have detrimental impacts on livelihoods of local communities such as fishing and floodplain farming, species movements, sediment flows to downstream deltas and floodplains, and other critical river functions. Thirty-three percent of all planned hydropower in the EU is in protected areas. For example, there are two hydropower projects threatening Natura 2000 sites in Romania: one in Defileul Jiului National Park and the other in Răstolița.

“Rivers are the lifeblood of ecosystems. Any policy that aims to conserve nature must prioritise the free flow of rivers,” said Michele Thieme, lead author of the study and lead freshwater scientist at World Wildlife Fund (WWF). “Protected areas are a fundamental strategy for conserving biodiversity and services to people, but their design and management to protect freshwater ecosystems must be improved.”

Freshwater biodiversity is declining dramatically. Populations of freshwater vertebrates (mammals, wetland birds, reptiles, amphibians, and fish) have seen an 83% decline between 1970 and 2014. One of the primary drivers of this decline are dams and other water infrastructure that impact the natural habitats of freshwater species like Danube sturgeons, Danube salmon and other fish, river dolphins, otters,  and tens of thousands of other species.

This study comes at a time when the adverse impacts of dams and reservoirs are clearer than ever. A 2019 paper published in Nature finds that over two-thirds of long rivers are impeded by dams and infrastructure. The paper also found that dams are one of the main factors in the 76% collapse in freshwater migratory fish populations since 1970. Dams fragment rivers and affect the diverse benefits that healthy rivers provide to people and nature across the globe. Monitored sturgeon populations have dramatically declined by 91% on average between 1970 and 2016, with exploitation, habitat degradation and change among the most commonly recorded threats. Mega-fish such as Beluga sturgeon (Huso huso), that used to reach record lengths of 7m are particularly vulnerable. Of the six sturgeon species previously present in the Danube Basin, two are already considered extinct.

The new study also underscores the importance of avoiding harmful rollbacks to protected areas, including those that increase infrastructure development like dams. Rollbacks have been occurring even during the global pandemic, a time when the public cannot adequately participate in decision-making processes. Governments must stop these rollbacks, and can use economic recovery plans as an opportunity to invest in river restoration.

The environmental opposition against new dams is growing. Some of the projects on larger rivers might be suspended such as those on the lower Drava, where the recently designated 5-country Mura-Drava-Danube Biosphere Reserve managed to change the narrative. A crowdfunding campaign with the support of WWF-Netherlands has enabled WWF-Ukraine to finance the removal of dams in Verkhovynskyi National Park, Ukraine that are blocking the migration of Danube salmon (Huchen huchen). So far, the extremely damaging plan of constructing a chain of hydropower stations on the Dniester in Ukraine is on hold.

With the falling price of wind and solar, governments should explore other alternative renewable energy sources to fulfil energy needs beyond damming rivers. A 2019 report, Connected and Flowing, details how the world can meet climate targets and protect rivers by shifting a portion of projected future hydropower development toward increased investment in wind and solar generation and carefully siting new hydropower projects.

Background
This research uses the World Database on Protected Areas, global dam data from Global Dam Watch, and protected area downgrading, downsizing, and degazettement data (legal changes that ease restrictions on the use of a protected area, shrink a protected area's boundaries or eliminate legal protections entirely) from PADDDTracker.

Protected Areas are clearly defined geographical spaces, recognised, dedicated and managed, through legal or other effective means, to achieve the long-term conservation of nature with associated ecosystem services and cultural values. These include nature reserves, RAMSAR sites, indigenous areas, and national parks, among others.

With 1000 hydropower plants, 400 more are planned or under construction, Bulgaria, Hungary, Slovakia, Romania and Ukraine are already saturated. The Danube catchment is becoming one of the most affected large river catchments not only in Europe but also worldwide. The Danube’s flow is being impeded by the Iron Gates Dams at river kilometre 863, hindering highly threatened migratory sturgeons and other fish from entering important spawning and feeding sites in the Middle Danube. The Olt River, originating in the Carpathian Mountains, is covered by a long chain of hydropower plants. Numerous new projects are appearing. They include two large dams on the Lower Danube, which date as far back as the Soviet rule, and many new small hydropower projects in Ukraine. 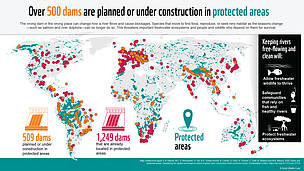 In Romania, the government recently modified legislation to open up dam construction in all protected areas across the country. 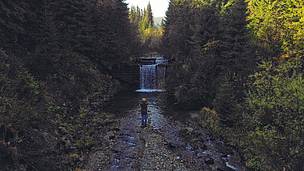