11 June 2021 - The Eurasian lynx was once quite common in most of Europe. Nevertheless, the original populations largely became extinct, and their abundance has been dramatically reduced in the last two centuries due to hunting, landscape changes, and habitat fragmentation that hinder migration. Protecting large carnivores like lynx and their habitats is a key element of WWF’s conditions for a European Green Recovery, and its goal to halt and reverse biodiversity and habitat loss by 2030.

In many areas, lynx were intentionally eradicated by humans. However, starting from the 1970s, lynx were ensured legal protection and reintroduction programmes began. Lynx currently number around 9000 in Europe, of which 2300-2400 are found in the Carpathian Mountains. These promising numbers foster nature conservationists’ belief that the beautiful and shy felines will find their rightful place back to the heart of Europe's forests. The return of the lynx remains a heated topic of debate, but fortunately it is backed by strict protection and many conservation projects. The Eurasian lynx is a highly endangered species, protected under national laws and the EU Habitat Directive.

The Situation in Central and Eastern Europe
Two different species of lynx exist in Europe. The more abundant Eurasian lynx (Lynx lynx) is also the largest lynx in the world. Its smaller relative, the Iberian lynx (Lynx pardinus) is only found on the Iberian Peninsula.1

WWF-Ukraine announced the launch of its ‘Let's Save Lynx’ Programme two years ago today. It remains the only comprehensive programme for the study and conservation of this large carnivore in the country.  ’Let's Save Lynx' studies the state and distribution of the lynx population in the Carpathians and Polissya; contributes to the preservation of its habitats; carries out educational work with hunters, communities and tourists; and develops and facilitates the implementation of proposals to strengthen law enforcement for the protection of the species. In two years, the programme has achieved results that can become the basis for the development of a state strategy for the protection of the Eurasian lynx in Ukraine.

‘Proper monitoring of the Eurasian lynx, as well as other Red Book species, depends on whether the state funds such research. Unfortunately, nature reserves are not able to provide these measures on their own due to lack of sufficient funding and facilities. It must be acknowledged that the conservation of wild species is not yet one of the priorities of the State's environmental policy. But the situation with the study of this species is not exceptional, but rather typical as for other Red Book-listed species in Ukraine’, explains Taras Yamelynets, Senior Rare Species Expert at WWF-Ukraine. ‘For effective protection of any species, it is necessary to have thorough data on its number, distribution and dynamics to understand the threats and challenges faced by the species. We believe that it is critical to create a state system for monitoring biodiversity. Without it, it will be impossible to ensure effective protection of the fauna of Ukraine, including Red Book species’.

WWF-Ukraine experts collected and analysed data from lynx finds in 650 locations and from more than 500 institutions in the Carpathians and Polissya to create an up-to-date map of lynx habitats for effective conservation planning and species study. Thirty photo traps were installed in nature reserves, national parks and forests where lynx occur. Monitoring guidelines for lynx in Polissya were developed. WWF-Ukraine analysed the current legislation and provided recommendations for the development of a mechanism, identification of sources and the compensation for damage caused by large predators, including lynx. Subsequently, a draft of a Law of Ukraine ’On Amendments to Certain Legislative Acts of Ukraine on Strengthening the Protection of the Brown Bear (Ursus arctos) and Lynx (Lynx lynx)’ in Ukraine has been developed which will compensate for material damage caused by lynx. A National Action Plan for the Conservation of Lynx in Ukraine has been created and officially sent to the Ministry of Environmental Protection and Natural Resources. The approved plan guarantees real actions and the allocation of state funding for the protection of the species at the national level.

Systematic dissemination of knowledge about sustainable coexistence and tools for preventive protection of domestic animals in the Carpathians is being conducted in order to improve co-existence and reduce human-wildlife conflict, and 29 electric fences have been distributed and installed in the Carpathians to protect property and domestic animals from attacks by large predators since 2019. Peaceful coexistence between farmers and lynx is possible!

In order to effectively protect the lynx, a European approach at the scientific, political and public level is absolutely essential. Linking Central European lynx and other large carnivore populations with each other is the key for the long-term survival of the species.

The Danube-Carpathian Region – also known as the Green Heart of Europe - is home to some two-thirds of Europe’s populations of large carnivores, including brown bears, wolves and lynx. Lynx and other large carnivores suffer from illegal hunting. But arguably a greater, longer-term threat lies in the fragmentation and degradation of their habitats e.g. from infrastructure construction. Conflicts between people and large carnivores are also growing, mostly due to inappropriate behaviour by people. WWF Central and Eastern Europe (WWF-CEE) is addressing these problems by focusing its efforts on securing critical corridors and conservation areas, e.g. in the southwest Carpathians (the Lugoj-Deva motorway construction) and in Maramures. WWF-CEE also promotes public awareness regarding large carnivores to increase the appreciation and understanding of these magnificent animals and their vital role in managing ecosystems, as well as to help people avoid unnecessary conflicts with them. Current projects include Open Borders for Wildlife, SaveGreen and the Euro Large Carnivores Project.

1 WWF-Spain announced the exciting news last month that the wild Iberian lynx population has increased tenfold in the last 20 years, from 94 individuals in 2002 to 1,111 lynx in 2020 according to the Iberian lynx census. Of these, 239 are reproductive females (up from 27 in 2002), an important indicator of the viability of the species. 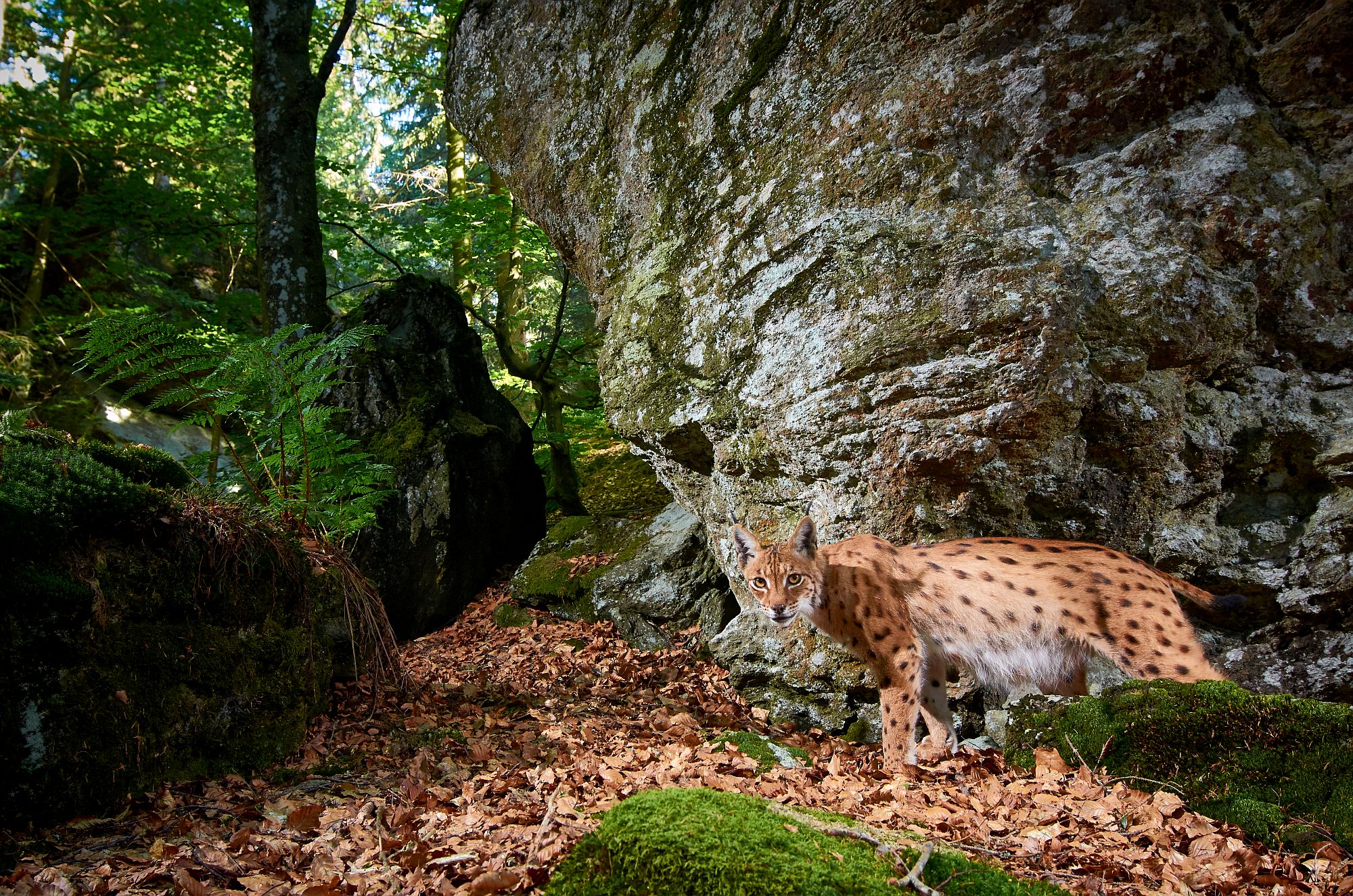 With a shoulder height of up to 70 cm and a body length of up to 120 cm, the Eurasian lynx is about as big as a German shepherd. 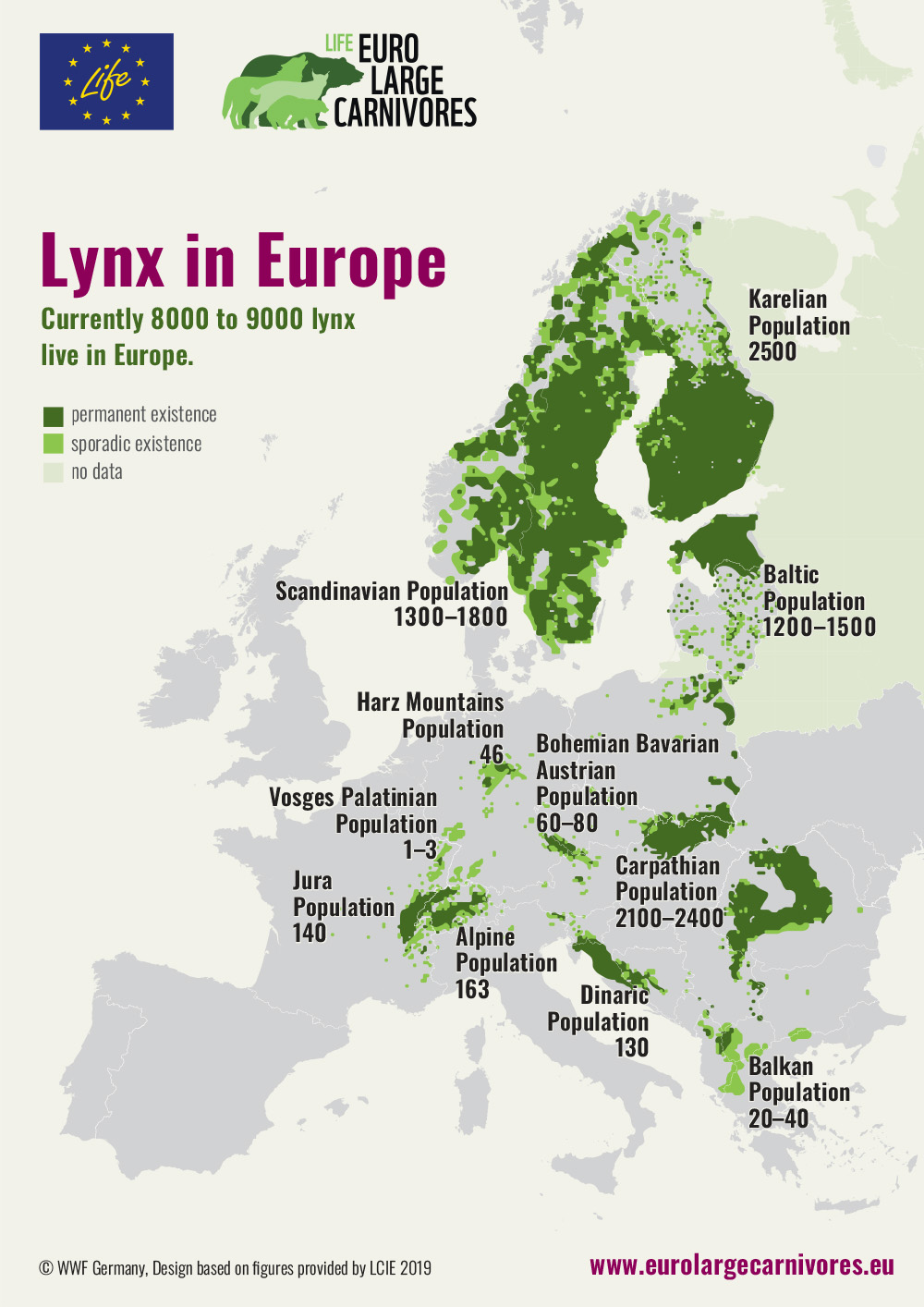 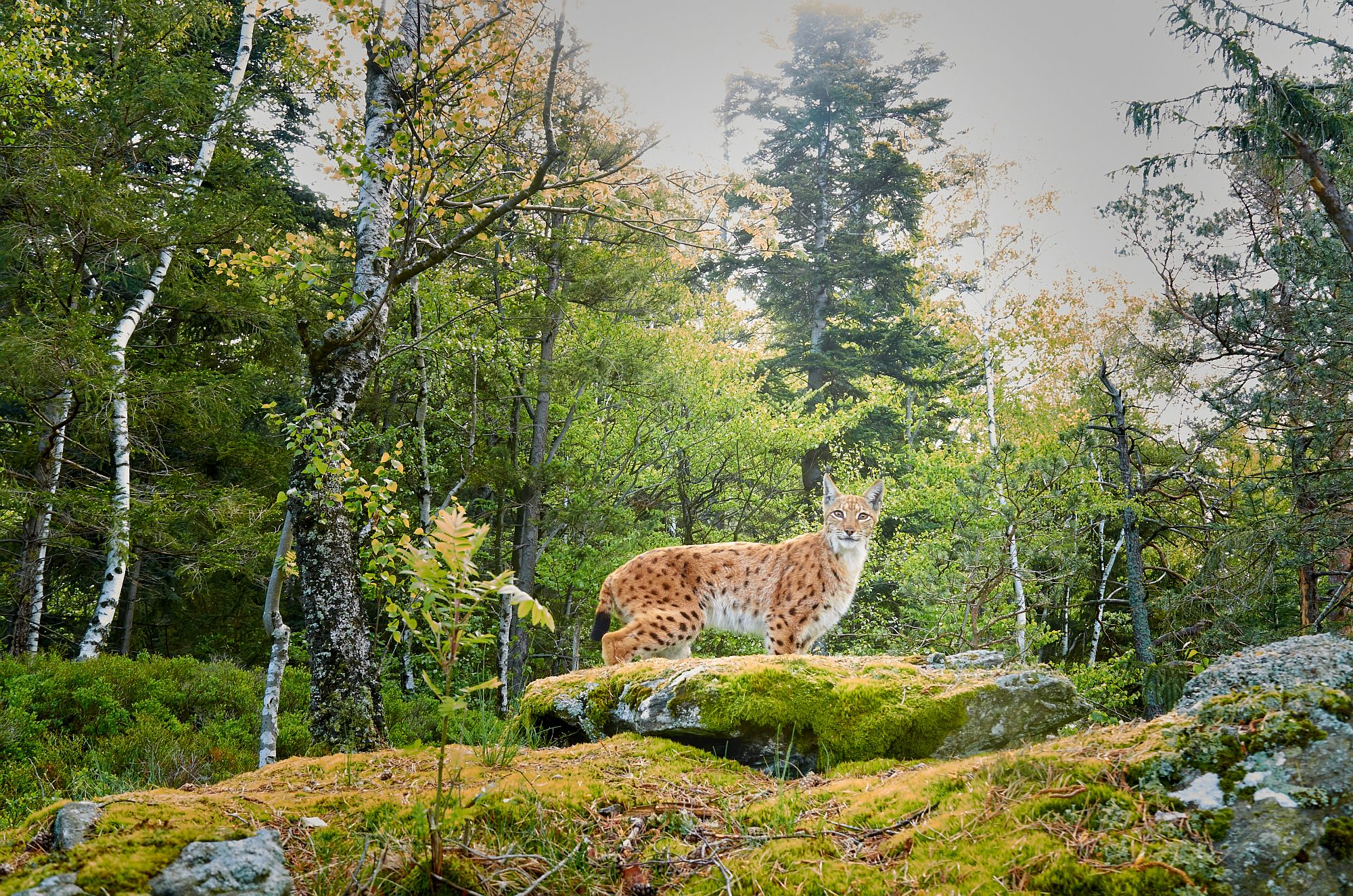 Each lynx has a different coat pattern. Similar to the human fingerprint, lynx can be individually identified by this pattern. 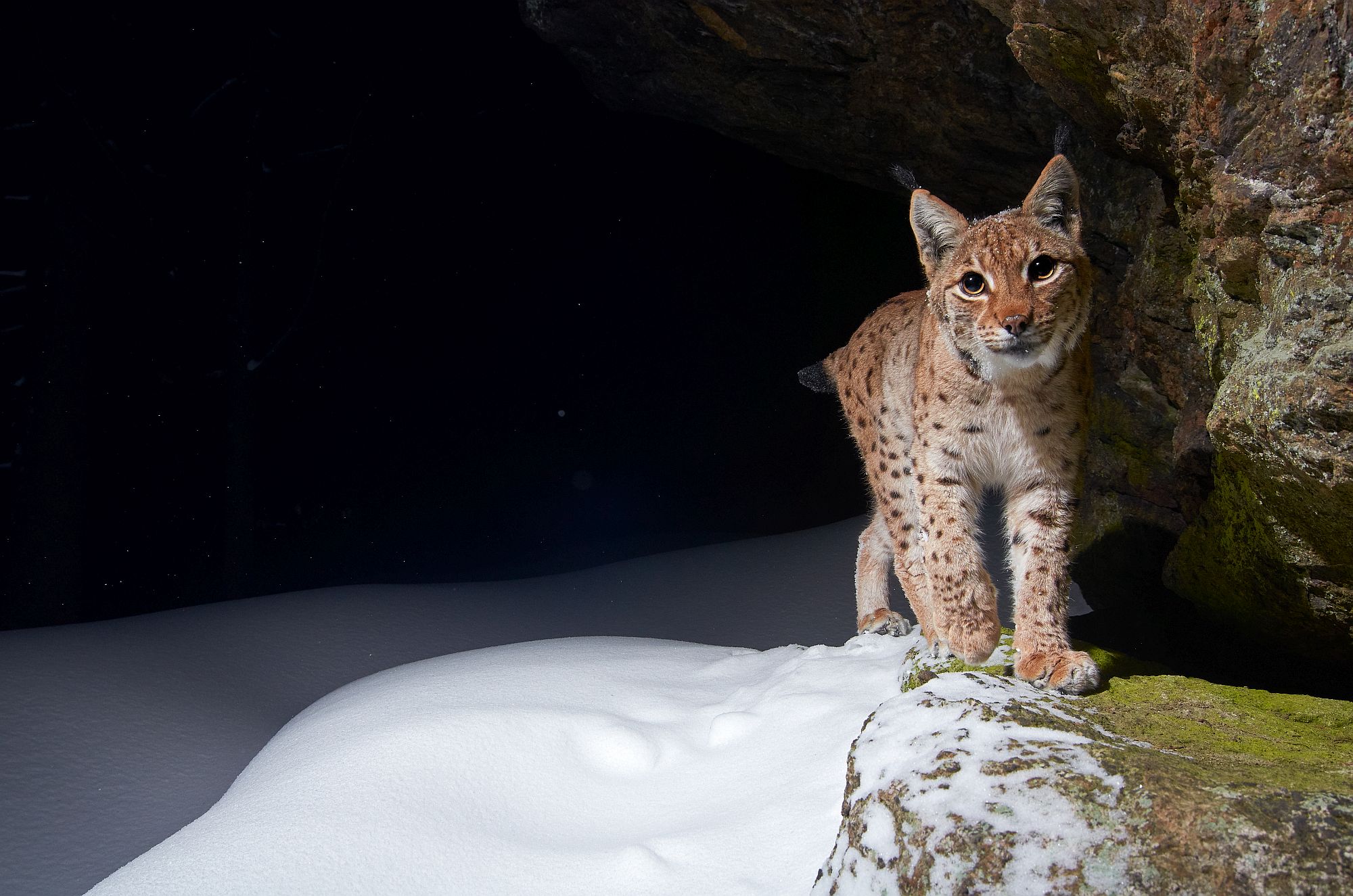