Restocking of 1500 Endangered Sturgeon into the Danube in Baja, Hungary

The fragmentation of rivers by structures like hydropower dams pose a threat to natural fish populations if they are no longer able to migrate.
“Sturgeon and other migratory fish species represent the historical, economic and natural heritage of the Danube.”

The Danube River fauna has been further enriched this month, as sturgeon stocking events continue in 2020. These events are part of the MEASURES Project (Managing and Restoring Aquatic Ecological Corridors for Migratory Fish Species in the Danube River Basin) to which WWF Central and Eastern Europe is a partner.

13-15 May 2020 -The aim of restocking activities is to save and strengthen the highly endangered sturgeon populations by strengthening their natural populations. Restocking of sterlet (Acipenser ruthenus) was managed by NAIK-HAKI, a project partner in MEASURES. The event took place at Baja (Hungary). May, 2020. In total, 1,500 fish were released during these three days. The fish are more than 1 year-old and have good chance of survival in the wild if not poached for their caviar or meat, or caught as by-catch. The individuals were tagged with T-bar plastic anchor tags (yellow), to enable identification in case of recapture by in-situ surveys or anglers. A recapture survey to provide further insight about the success of restockings is planned at the end of 2020 in Hungary.

Sturgeon and other migratory fish species represent the historical, economic and natural heritage of the Danube. Furthermore, they are indicators of the ecological status of the river’s watercourses, especially concerning the function of the river as an ecological corridor. The fragmentation of rivers by transversal structures like hydropower dams or flood protection measures poses a threat to natural fish populations if they are no longer able to migrate between important habitats like spawning grounds, feeding grounds and wintering habitats. Sterlet are a freshwater sturgeon species so do not have to contend with migration obstacles such as hydroelectric dams to the Black Sea. Transnational management and restoration actions to re-establish these corridors as migration routes, as well as stocking with indigenous species are essential until we have achieved a self-sustaining population again.

"Conservational restocking is one of many necessary actions to save endangered fish. In conjunction with the provision and restoration of habitat, it is essential to increase the number of animals of species and populations on the very brink of extinction" - Thomas Friedrich, University of Natural Resources and Life Sciences, Vienna.

The event was organised by the MEASURES Project, which is co-funded by the European Union (ERDF, IPA).

About the project
MEASURES (01.06.2018-31.05.2021) joins the forces of 10 countries along the Danube (Germany, Austria, Slovakia, Slovenia, Hungary, Croatia, Serbia, Romania and Bulgaria) to conserve endangered migratory fish species in the Danube River Basin (DRB). During the three years of the project, MEASURES will map and identify key habitats by developing and testing a methodology for migratory fish habitat mapping, develop a harmonised strategy for restoring ecological corridors, and support inclusion in future management plans. The project will also compile an online database - the “MEASURES Information System” – that will facilitate the access of experts, decision-makers and the general public to the relevant information available.

WWF is engaged in sturgeon protection measures in most Danube countries, for example through the Life for Danube Sturgeons Project. Sturgeons used to be present in almost all European rivers, but today seven out of the eight species of sturgeon on the European continent are threatened with extinction. Sturgeons have survived the dinosaurs, but now teeter on the brink of extinction. The Black Sea Region is crucial to the survival of these species in Europe. The Danube and the Rioni River in Georgia are the only two rivers remaining in Europe where migrating sturgeons reproduce naturally. The main reasons are overfishing and loss of habitat through dams that block migration routes or in-river constructions, facilitating navigation. These are often detrimental to the feeding and spawning habitats, necessary for sturgeon survival. Within the EU the only river with naturally reproducing sturgeon populations remains the Danube. Crucial but no longer reproductive stocks are left in the Po River in Italy and the Gironde in France. Restocking activities take place in Bulgaria, Hungary, Romania, France, Germany, Poland, Austria and the Netherlands. Our priority is to identify and protect the critical habitats of the remaining four sturgeon species (Huso huso, Acipenser stellatus, A. ruthenus, A. gueldenstaedtii) in the Lower Danube and north-western Black Sea, as well as to reduce pressure on their remaining populations by addressing poaching and ensuring protection. 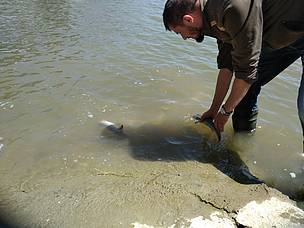 The 1,500 sterlet have a good chance of survival in the wild if not poached for their caviar or meat. 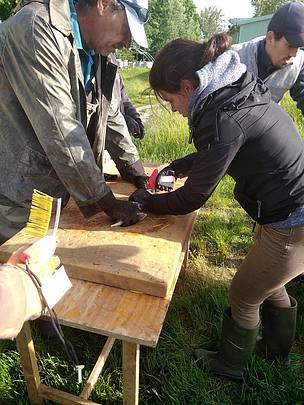 The individuals were tagged with T-bar plastic anchor tags (yellow), to enable identification in case of recapture by in-situ surveys or anglers. 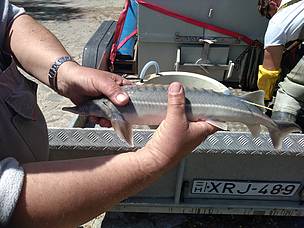 Transnational management and restoration actions to re-establish these corridors as migration routes, as well as stocking with indigenous species are essential until we have achieved a self-s