Looking back at WWF-Slovakia’s achievements in 2022

It is a fact, confirmed by the Living Planet Report, that we are witnessing an alarming decline in wildlife numbers, with freshwater animals being the most threatened in the long term. In Slovakia, migratory fish are also among the most endangered, due to river modifications and the construction of dams and other barriers. Looking back at the past 2022 we are motivated by our achievements in the areas of conservation we worked on:

In 2022 WWF Slovakia was focusing on restoration and revitalization projects of the Danube and removing barriers on rivers together with explaining the importance of this topic to the public. Part of this was an exhibition on how removing barriers brings back life to rivers. We are working on preventing the construction of further small hydropower plants on the river Hron and mitigating the consequences of the existing ones. Especially in the case of Želiezovce HPP.

Our freshwater expert Martina Paulíková has been awarded with the prestigious award Biela Vrana – „White crow“ for her decades-long dedicated work as an enviro-activist. For almost thirty years she has been trying to prevent the construction of a water reservoir that would have flooded the village of Slatinka and its precious natural habitats. In the year 2022, thanks to her effort, the government approved documents designating the area as a protected area of European importance and obliging the state not to build on it. We are very proud to have people like Martina on our team.

We worked on expanding the area of forests managed according to FSC rules. The FSC = Forest Stewardship Council label guarantees that timber has not been harvested illegally and that forest management has been sustainable and does not result in the degradation of valuable areas. We are increasingly seeing the effects of climate change in Slovakia, which also threatens the future of our forests. Together with our partners, we keep working to restore and change how forests are managed so that they are resilient to climate change.

The experts from WWF Slovakia prepared a report, in which they summarized and analyzed available information on crimes and offenses in the area of poaching, and violations of plant and animal protection, including illegal trade in endangered species. We have also made a film called „From Puppy to Herd Protector“, which conveys farmers' experiences with traditional and effective protection of sheep from attacks by carnivores. The film is available for the public for free.

River Danube and side arms 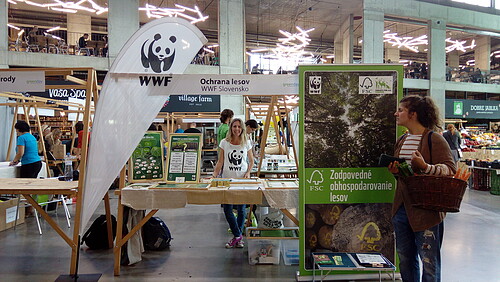