More than 596 animal species and 200 plant species benefit from these huge herbivores.

21 May 2021 - Thirteen more European bison arrived from Germany on May 13 to Bison Hillock in the Southern Carpathians of Romania. The Bison Hillock herd is the largest population of free bison in Romania, and thanks to this latest transport now stands at about 80 individuals. European bison is one of the most vulnerable large mammals in the world, and it is protected at the European level. The Life-Bison rewilding project, begun in 2014 by Rewilding Europe and WWF-Romania aims to create a viable population that breeds in the wild and supports the area's biodiversity, but also brings back a cultural value, a symbol that has allowed people in the local communities to rediscover the beauty of their surroundings, and develop entrepreneurial activities based on experiences in nature. Romania is among the few countries with European bison roaming in the wild.

Bison bonasus, the largest land mammal in Europe, is an umbrella species that safeguards the quality of life of other species in the food chain and preserves wilderness strongholds and natural balance on which we all depend. The bison’s browsing ability in the search of food helps maintain a mosaic of forested areas and grasslands, a landscape which is highly valuable for its biodiversity and natural resilience in the face of climate challenges. More than 596 animal species and 200 plant species benefit from these huge herbivores. Moreover, the bison is a species that, if successfully re-introduced and its habitat actively preserved across the entire Carpathian Mountains, will help maintain ecological corridors on a large scale, allowing for species migration, such as brown bear, wolf or lynx. The long-term conservation of the bison species is of high importance for the entire ecosystem. That is why every decision on achieving a genetically viable population is important.

The project goes through a complex selection process that ensures the genetic diversity of future wild European bison generations. Each bison is genetically valuable and is carefully chosen by specialists to be translocated and released into this optimal habitat, the Ţarcu Mountains Natura 2000 Site.

“We know the family tree of each bison that is transported. For example, the bison that have now arrived are 10 females from the Springe Reservation, 3 females from the Donaumoos Reservation’ says Alexandra Sallay-Moșoi, LIFE Re-Bison Technical Project Manager, WWF-Romania. ‘We work with over 16 breeding centres and reservations in Europe, and consult with numerous specialists to identify suitable bison individuals to join groups already in the wild.”

LIFE-Bison rangers will carefully monitor the behaviour of the newcomers for the next 21 days in a quarantined acclimatisation enclosure. The bison will then be released into the wild where they will explore their new territory, rich in forests and meadows.

“We are a huge team of people who have a common goal. Veterinarians, biologists, farmers, rangers, hunters, tourists, the media, we all support the conservation of European bison and the increase of biodiversity in Romania,” says Marina Drugă, LIFE RE-Bison Project Manager, WWF-Romania. “The road to success that brings benefits to everyone is complex but necessary, and the results up to this point are gratifying. We have calves born in the wild and tourists living in restored hamlets. A balance is being achieved.”

Since January 2021, due to long-term conservation work, European bison (Bison bonasus) are no longer considered a vulnerable species in a few European countries. The European bison population has increased from about 1,800 in 2003 to over 6,200 now; meaning that the species has moved up the IUCN red list classification to “almost threatened.”

The relocation of the bison in the Ţarcu Mountains took place in good conditions due to the professionalism of the transport company HUNLAND Trade from Hungary, which has assisted the rewilding team during 4 transports. The next transport will take place at the end of May and will contain 6 bison coming from the Avesta Reservation in Sweden.

There are now more than 100 bison in three different areas in Romania: Vânători Neamț Natural Park, Făgărș Mountains and Țarcu Mountains. The species was rarer than the black rhino and survived only in captivity in the early 20th century. The reintroduction of the bison into the wild began in the 1950s, and in Romania in 2012. The largest subpopulations are now found in Poland, Belarus and Russia, but only eight of these herds are large enough to be genetically viable in the long run. The species remains dependent on ongoing conservation measures, such as the relocation of bison to optimal habitats to create viable populations and the promotion of human-bison coexistence.

The bison reintroduction in the Southern Carpathians has been made possible by the LIFE Re-Bison Project: Urgent actions for the recovery of European Bison populations in Romania financed by the European Commission through the LIFE Programme, generous support of tourists throughout Europe, the national Romanian authorities, and local communities, for which we are extremely grateful. 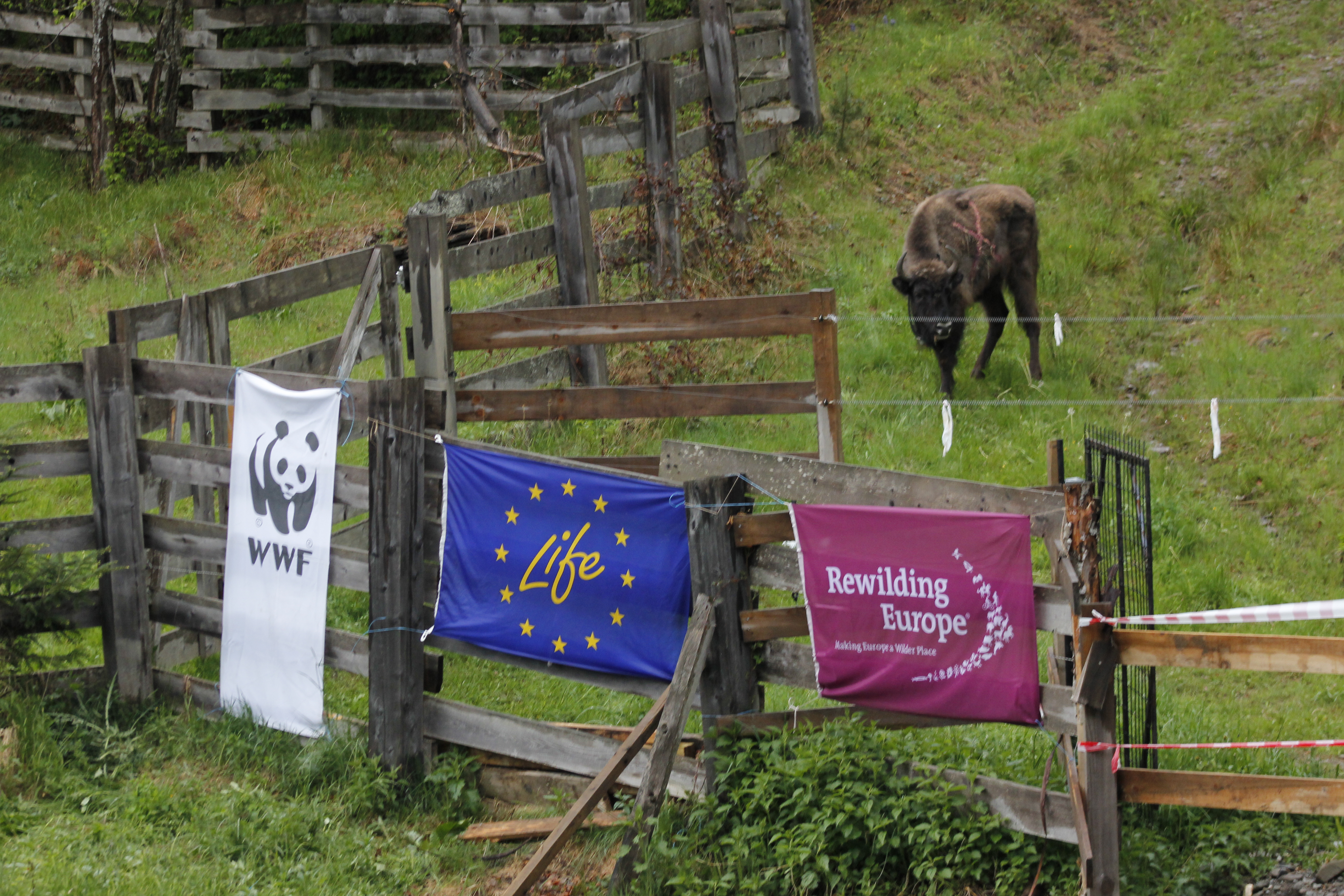 Bison bonasus, the largest land mammal in Europe, is an umbrella species that safeguards the quality of life of other species in the food chain

The Life-Bison rewilding project, begun in 2014 by Rewilding Europe and WWF-Romania aims to create a viable population that breeds in the wild and supports the area's biodiversity.