The exact documentation of the new investments planned on the Hajógyári Island has been recently published, which aims at the establishment of a kayak-canoe centre and the investment for flood protection of the whole island. According to WWF Hungary, the investment is not only harmful due to the construction of a valuable urban green space, but the further reduction of the heavily narrowed floodplain of the Danube is not a wise decision considering the effects of climate change. 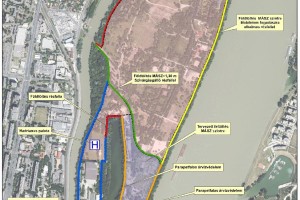 A climate risk study of Hajógyári Island shows that the investment would involve a felling of about 650-1000 old trees. While valuable forests are being cut down elsewhere to reduce the risk of flooding, this project will significantly increase the flood risk in Budapest by narrowing the active floodplain. According to the plans, the island surrounded by dams would be like a basin doused into the Danube during the floods, which would create a great flood risk in itself on the island. With the construction of the dams, the floodplain will decrease to such an extent that the flood level would increase by almost 10 cm - and this could endanger the properties on the banks of the Danube in Pest and Buda. Besides, pier stability problems may appear at the Megyeri Bridge, and due to the disturbance of the area, allochthon invasive species may take the place of gallery forests, consisting native plants.

Floodplain areas along the river are important in several ways: they ensure home for rich wildlife and provide many recreational opportunities for people. This applies especially to urban areas where there are currently relatively few large, contiguous green areas, thus heat waves hit the population much harder. 54% of people live in cities worldwide and this proportion is growing steadily. Therefore, the preservation of urban green areas is particularly important. If investments are initiated at the expense of these, the involvement of residents and stakeholders cannot be avoided during planning.

We bear the brunt of the destruction of wetlands

Since the river regulations, 97% of the Hungarian wetlands have disappeared, which has not only resulted an intense reduction of aquatic life but has also damaged the functions and services of nature, which are an essential part of the human living environment. Examples include the reduction of heat island effect in cities, carbon sequestration, microclimate control, or the improvement of air quality, not to mention many recreational opportunities.

Today, we have reached the point where most of the natural habitats have disappeared, their condition has deteriorated, they have lost their ability to self-regulate, for this reason, their survival requires more and more treatment. “In the area of the capital, it is especially true that the last pieces of green areas along the Danube have particular significance in many respects. Both for ensuring a livable environment and for combating climate change. Hajógyári Island also draws attention to the fact that we cannot cope with the environmental challenges of the 21st century if the protection of natural resources and green areas continues to be subordinated to exaggerated infrastructure developments,” said Katalin Sipos, Director of WWF Hungary.