Let's uncover Hron: The protectors of the rivers set out on a symbolic journey through the river

In order to draw attention to the need to preserve healthy rivers without huts in Slovakia, on Sunday, August 23, 2020, conservationists, fishermen, paddlers, as well as scientists and activists set out from the Kráľova hole near the Hron spring for a 300 km journey through the country and the river. They were supported by the Minister of the Environment Ján Budaj with a friend of the Hron River, Milan Kňažek, the Minister of Agriculture Ján Mičovský, as well as the State Secretary of the Ministry of the Environment Michal Kiča. Conservationists will arrive at the Hron estuary in the Danube below Štúrovo in 9 days. The information campaign "For Healthy Rivers without Hats 2020" is subtitled #odhatajmeHron. 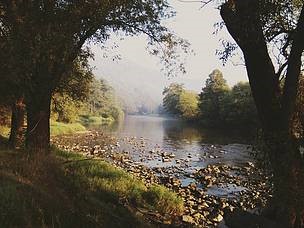 There are already 20 small hydroelectric power plants (SHPs) on the Hron River, smaller stages and huts were also built for water abstraction. Another 14 SHPPs are still being prepared, most of them have not undergone a proper assessment of impacts on water status and the environment, as evidenced by recent court rulings in the case of the SHP Hronský Beňadik and SHP Žiar nad Hronom SHPPs. Environmentalists have long criticized the fact that the MVE cascade would worsen the state of aquatic ecosystems and damage the river landscape around Hron. Some negative effects are already showing today, for example, the decrease of the groundwater level under the dam, the accumulation of sediments above the MVE dams and the like.

For the first 70 km, conservationists travel along the Hron on bicycles. From the camp in Nemecká on Monday morning, August 24, 2020, paddlers will board the boats and float daily along the river for approximately 25-30 km to its mouth into the Danube. The event will also include several accompanying events - a screening of a film about the journey of Hronom in 2015 (German, 23 August 2020); discussion in Banská Bystrica on benefits and losses due to MVE in Hron (24 August 2020); screening and discussion (not only) of the MVE planned in Žiar nad Hronom (August 26, 2020, 7 pm) and finally a public meeting in the style of "die-in" - happening with a symbolic "sleep" of participants and with large inflatable fish before the District Office in Levice, which has been "sleeping" for three years in the case of the investigation of the environmental damage in connection with the operation of the MVE in Želiezovce.

"The #odhatajmeHron campaign follows a similar event from the summer of 2015, when the journey For the Living River Hron took place in order to draw attention to the negative consequences of the planned construction of new dams on the river Hron. The result is the cooperation of local initiatives and associations of conservationists, fishermen and boaters in the protection of the river - we managed to prevent the construction of new dams due to MVE on the middle and lower reaches of the Hron. Now is the time to talk about existing huts, which are a barrier to animal migration and which worsen the state of the water. Their benefits and losses should be objectively evaluated, and if the negatives exceed, let's discuss their elimination, ” says Martina Paulíková from the Slatinka Association, who also acts as an external expert at WWF Slovakia.

Five years after the "For a Living Hron River" raft, civic initiatives, associations and individuals are once again coming together to draw attention to the need to protect our rivers, especially the Hron River. While in In 2015, the aim of the journey from the source of Hron pod Kráľovou hoľa to the mouth of the river to the Danube was to draw attention to the number of new huts and MVE being prepared. By 2020, fishermen, conservationists, boaters and others will be wandering the river with the slogan #detrack Hron!