The Supreme Court of the Slovak Republic definitively stopped the licensing of a small hydroelectric power plant in Žiar nad Hronom, Central Slovakia. In the landmark decision, the Slovakian Supreme Court said, “The public interest, which is the protection of the environment, takes precedence over private business interest.”

2020 July 30 - The Supreme Court of the Slovak Republic upheld the decision of the Banská Bystrica Regional Court which, due to illegality, cancelled the decision of the Žiar nad Hronom building authority which allowed the siting of a small hydroelectric power plant in Žiar nad Hronom on the Hron River. It is another in a series of legal disputes over the controversial construction of small hydropower plants (SHPP) on the Hron. There are 22 additional SHPPs planned on the river, in addition to the 20 already in operation.

Conservation organisations (Association Slatinka, Rieka, Hereditas HH and the Slovak Fishermen's Association) with the support of WWF-Slovakia legally challenged the siting decision in 2018 by filing a lawsuit in cooperation with the VIA IURIS association.

The Regional Court in Banska Bystrica ruled on the matter in the autumn of 2018. The Court accepted some of the plaintiffs' arguments and annulled the decision to locate the SHPP. However, the investor and also the District Office in Banská Bystrica appealed against this judgment. The Supreme Court’s final decision this week fully upheld the judgment of the Banská Bystrica Regional Court. In its arguments, the Supreme Court added extensive and thorough considerations with clear instructions applicable to other cases.

“A SHPP in Žiar nad Hronom would have been another obstacle on the Hron River. There are already two SHPP (Hronská Dúbrava and Zvolen) on that 25 km stretch of river. Both are impassable for migratory fish. According to the Supreme Court, there was no proper assessment of the environmental effects of the construction. Furthermore, the Žiar nad Hronom Building Authority did not pay sufficient attention to the public interest - the protection of the environment. It is a ground-breaking decision, because for the first time the Supreme Court paid close attention to the fact that building authorities must also take their role seriously  to protect the environment in territorial proceedings,” said Miroslava Plassmann, CEO of WWF-Slovakia.

The Supreme Court’s ruling cannot be appealed. Following this decision, WWF-Slovakia also calls on the competent state authorities to start considering the removal of existing small hydropower plants, especially those whose negative effects significantly outweigh the positive ones. The recent Pan-European Atlas of In-Stream Barriers identified 152 dams, wiers, sluices and other barriers on 20412 km of Slovakian rivers.

The court decision is extensive and detailed. The most important frameworks applicable to other environmental cases include:

Background:
With 1000 hydropower plants, 400 more are planned or under construction, Bulgaria, Hungary, Slovakia, Romania and Ukraine are already saturated. The Danube catchment is becoming one of the most affected large river catchments not only in Europe but also worldwide. The Danube’s flow is being impeded by the Iron Gates Dams at river kilometre 863, hindering highly threatened migratory sturgeons and other fish from entering important spawning and feeding sites in the Middle Danube. The Olt River, originating in the Carpathian Mountains, is covered by a long chain of hydropower plants. Numerous new projects are appearing. They include plans for two large dams on the Lower Danube, which date as far back as the Soviet rule, and many new small hydropower projects in Ukraine. However, the environmental opposition against new dams is high. Some of the projects on larger rivers might be suspended such as those on the lower Drava, where the recently designated 5-country Mura-Drava-Danube Biosphere Reserve managed to change the narrative. 2,500 (28%) of all planned hydropower is in protected areas (33% in the EU); such as two hydropower projects threatening Natura 2000 sites in Romania: one in Defileul Jiului National Park and the other in Răstolița where the government recently modified legislation to open up dam construction in all protected areas across the country.

There is still an opportunity to turn the tide.The hundreds of hydropower, and dozens of navigation and flood protection infrastructure plans under preparation in Central and Eastern Europe would require proper biodiversity safeguards or be dropped altogether under the EU Water Framework Directive (WFD) in order to ensure that no harm will be done to migratory fish and their habitats.

WWF-CEE is addressing threats to rivers and wetlands, including dangers posed by inappropriate dams and other infrastructure; promoting guidelines and best practices for the development of hydropower to provide security of planning for investors; and ensuring that clean and renewable energy from water does not come at too great a price in terms of other ecosystem goods and services. For example, advocacy by WWF-Romania and its partners prevented EU funds from financing harmful flood infrastructure projects at Colibita and Gurasada. In a case initiated by WWF, Romania’s highest court ordered a stop to construction of a dam on the Jiu River. In Ukraine, construction of a planned cascade of six hydro plants on the Dniester River has been frozen. The Drava River Campaign with WWF-Adria placed 2 hydropower plants along the Drava on indefinite hold. 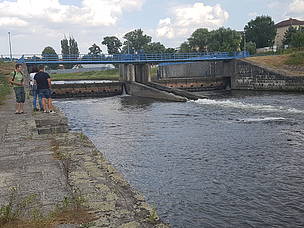 mall Hydropower Plant on the Hron River at Zvolen 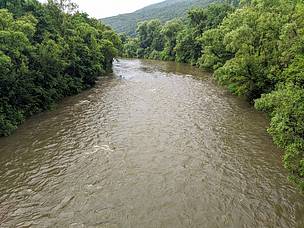