29 June 2020 - The scale of river fragmentation recorded by the study is alarming, making Europe the most obstructed river landscape in the world. These barriers - such as dams, weirs, ramps, fords and culverts - have a terrible impact on rivers; affecting river health, the quality and availability of water, and threatening the survival of vulnerable species such as sturgeon and other migratory fish.

The new Pan-European Atlas of In-Stream Barriers assessment contains information on 630,000 barriers. However, after walking 2,700 km of streams in 28 countries, Adaptive Management of Barriers in European Rivers (AMBER) researchers found that more than one third of all barriers were still unrecorded. The new data brings the total in Europe to well over 1 million river barriers.

“Even areas that were considered to be relatively pristine and well connected are in fact impacted by barriers. For example, in the Balkans, our field validation indicates that 80% of barriers do not appear in current inventories, making the fragmentation of these rivers much worse than people thought.” - Carlos Garcia de Leaniz, AMBER project coordinator and Professor of Aquatic Biosciences at Swansea University

Traditionally, river managers have tended to view river fragmentation as being caused solely by large dams, but AMBER researchers have found this is seldom the case. In Europe, over 85% of barriers are weirs and other small structures. All barriers, whatever their size, impact on river health, changing a river’s natural flow, blocking fish migration routes -- affecting fish stocks and the survival of vulnerable species -- and trapping sediments that protect riverbanks and deltas against floods and sea level rises. Many of the barriers mapped by AMBER are out of use, and could be removed as they break river connectivity and block the movement of sediments and wildlife.

With hardly any free-flowing rivers left in Europe, the study adds to an already bleak picture. Sixty percent of EU waters are currently not healthy [1], and freshwater species are amongst the most threatened in Europe - one in three European freshwater fish species are threatened with extinction [2].

With 1000 hydropower plants, 400 more are planned or under construction, Bulgaria, Hungary, Slovakia, Romania and Ukraine are already saturated. The Danube catchment is becoming one of the most affected large river catchments not only in Europe but also worldwide. The Danube’s flow is being impeded by the Iron Gates Dams at river kilometre 863, hindering highly threatened migratory sturgeons and other fish from entering important spawning and feeding sites in the Middle Danube. The Olt River, originating in the Carpathian Mountains, is covered by a long chain of hydropower plants. Numerous new projects are appearing. They include two large dams on the Lower Danube, which date as far back as the Soviet rule, and many new small hydropower projects in Ukraine. However, the environmental opposition against new dams is high. Some of the projects on larger rivers might be suspended such as those on the lower Drava, where the recently designated 5-country Mura-Drava-Danube Biosphere Reserve managed to change the narrative. 2,500 (28%) of all planned hydropower is in protected areas (33% in the EU); such as two hydropower projects threatening Natura 2000 sites in Romania: one in Defileul Jiului National Park and the other in Răstolița where the government recently modified legislation to open up dam construction in all protected areas across the country.

The tools and commitments exist, but they are redundant unless fully implemented, enforced, and met with ambition and political will. EU Member States need to pull out all the stops to ensure the WFD works not just on paper but in practice, and to tackle the pressure of these barriers at the source. This should include drastically stepping up dam removals and barrier management in the next round of River Basin Management Plans (the plans Member States are required to submit under the WFD) for the period 2021-2027.

“Over 60% of EU freshwater systems are in a poor state in part due to habitat fragmentation. To improve the health of our rivers, we need to reconnect them—our Atlas and tools will support this endeavour.” - Barbara Belletti, who led the development of the AMBER Atlas at Politecnico di Milano along with Wouter van de Bund at the Joint Research Centre of the European Commission

The data collected through the AMBER project starkly complements the first Europe-wide mapping of hydropower plants, released by WWF last year, which found Europe’s rivers to be saturated with more than 20,000 hydropower dams, and more than 8,000 additional ones on the cards.

In the EU, there is hope: The European Commission just last week opted to safeguard the EU’s strong water legislation, the Water Framework Directive (WFD). The EU’s Commissioner for Environment, Ocean and Fisheries, Virginijus Sinkevičius, underscoried the need to boost implementation and enforcement. Last month, the EU Commission also put forward a concrete commitment to restore at least 25,000 km of free-flowing rivers in the EU Biodiversity Strategy.

Notes to the Editor:
The Pan-European Atlas of In-Stream Barriers, produced by the EU Horizon 2020 project Adaptive Management of Barriers in European Rivers (AMBER), is the most comprehensive overview of river fragmentation in Europe to date.

The Pan-European Atlas of In-Stream Barriers data can be used to estimate river fragmentation at various spatial scales. Together with several restoration tools specifically developed by the AMBER consortium, this information can help river basin managers minimize the impacts of barriers. For example, AMBER research indicates that most of the loss of connectivity is typically caused by a relatively small fraction of barriers, so it makes sense to prioritize these. The priority should be to protect the least fragmented rivers and to act on those barriers that cause most of the damage.

About AMBER
The EU Horizon 2020 AMBER project seeks to apply adaptive management to the operation of dams and other barriers in Europe’s rivers to achieve a more sustainable use of water resources and a more efficient restoration of stream connectivity. The project has developed tools and simulations to help water companies and river managers maximize the benefits of barriers and minimize ecological impacts. AMBER promotes habitat connectivity and evaluates the merits of different restoration actions through an evidence-based and a what if simulation approach.

All tools developed by the AMBER consortium will be available on the project website (www.amber.intenational) before the end of 2020. 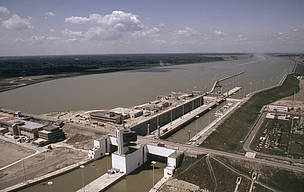 Gura Apei dam in Retezat National Park, Romania has a negative impact for the habitats of the valleys where the streams are diverted. An existing example is obvious on a section of the Rau Ma