We must acknowledge what the impacts of delayed implementation of governments’ climate targets will really mean for people and nature, says WWF’s Dr Stephen Cornelius.

On Monday, the virtual approval session begins for the latest climate science report from the UN’s Intergovernmental Panel on Climate Change (IPCC). The report is expected to outline the severe impacts of a warming world on natural and human systems and how adaptation can help reduce vulnerability and manage climate risks. It is expected to make the devastating consequences of climate change for people and nature clearer than ever.

The new report follows in the wake of the COP26 UN climate talks in Glasgow, where world leaders failed to close some significant gaps in the global response to the climate crisis.

Dr Stephen Cornelius, WWF Global Lead for IPCC said: “The upcoming climate report from the IPCC is expected to lay bare the devastating impacts that delayed action and weak implementation of countries’ climate promises are having on people and nature.

“Over the past year we’ve seen more examples of the ruin to lives and livelihoods caused by more frequent extreme events, from heatwaves to floods and wildfires. This offers a small glimpse of what a warmer world brings. We know that to help communities and ecosystems now and in the years to come, governments need to invest more to build climate resilience and to slash polluting carbon emissions to give adaptation a fighting chance.” 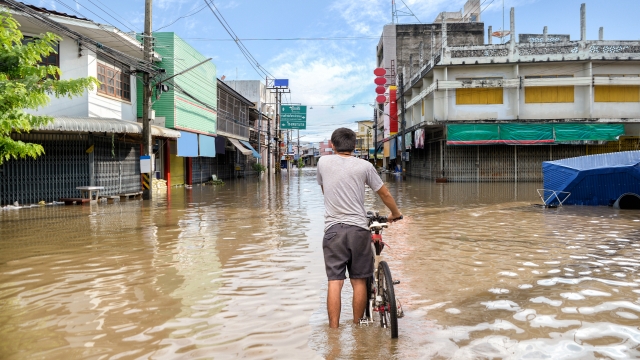 A man pushes a bike down a flooded street in Thailand, 2015