Local producers are our allies when it comes to protecting nature - from water quality to preservation of wild species.
While today craft beer might not be brewed by monks in the middle of nowhere, most things haven’t changed - like the importance of natural ingredients - hops, grains, yeast and water. Water - that key ingredient without which we might all just be munching on some dry beer like WWF’s Protect Water campaign envisioned. Maybe it was this chilling thought, maybe something more; but in 2018, Romanian craft brewers did not need much convincing to offer their support for the EU Water Framework Directive campaign to protect local rivers and other water sources. The Romanian Craft Brewers’ Association - Ground Zero, Hop Hooligans, Perfektum, Sikaru, Three Happy Brewers and Zăganu - supported the manifesto for clean water. "After all, Beer is 90 to 95% water. A local supply of quality water and its characteristics, such as pH and mineral content, are therefore crucial elements in the production of great-tasting beer.”

When Romanian craft beer brewer Fabrica de Bere Bună Zăganu launched in 2013, they decided to name the beer Zaganu to honour the bearded vulture-eagle that lived in the area and had been hunted to extinction. The name symbolises what the company sees as their mission - to redefine the beer industry and reinvent the tradition of craft beer in Romania. Zăganu has two things in common with WWF - its love of pure water and its mission to protect Romanian symbols; be it craft beer or wildlife. They see nature not only as a resource, but as a partner. This is why they joined WWF-Romania’s “Colours in Extinction Campaign.”

In 2019, the brewer took a step to try to save another species from extinction, and introduced a limited edition "Sturionul" (Sturgeon) Pale Ale with a label in the colours of the sturgeon. Sturionul is an unpasteurised American Pale Ale, naturally brewed near the foot of Zaganu Mountain (1817 m) in the Carpathian Mountains, and fermented for at least 23 days. Instead of monks, there are a handful of skilled former corporate people doing their best. Or, in their own words, brewing sturgeon beer “because we don't want the sturgeon, one of the oldest animals in the world, to have the same fate as the bearded vulture, especially since 5 of the 6 species of sturgeon native to the Danube are on the list of critically endangered species”.

During this period, more than ever, we need each other. So take care of all your loved ones, and if you can, support small producers and entrepreneurs near you - especially if those local producers share WWF’s vision for a green recovery. Get your sturgeon beer here. 2% of sales go to WWF conservation projects.
partners sturgeon freshwater romania innovation 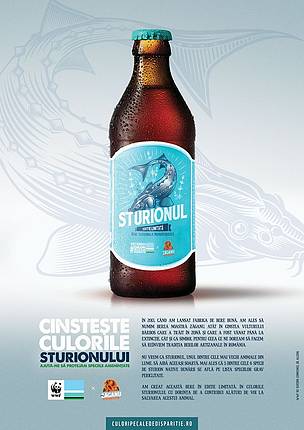 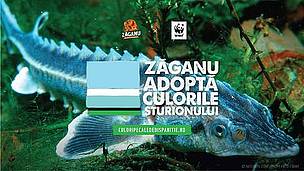 n 2018, the brewer took a step to try to save another species from extinction, and introduced a limited edition "Sturionul" Pale Ale with a label in the colours of the sturgeon. 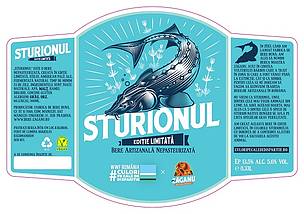